Skeletal radiographs in the neonate

Please note: images that have a white symbol at the top right, such as the Fractured humerus image below, indicates an image gallery that has multiple images - click on the image to open the gallery.

Fractured clavicles are found in up to 2.9% of term infants, more frequently on the right side. They are often silent but may be noticed later when a palpable callous forms at a few weeks of age.

There is often minimal pain apparent, but if the infant is uncomfortable strapping may be all that is required for a few days.

The radiograph to the right shows a linear lucency at the lateral one third of the clavicle.

Midshaft (diaphyseal) humeral fractures are often diagnosed at birth when a "crack" or "snap" is heard or felt on delivery of the baby. Clinical signs are variable - the baby may be asymptomatic, may be in pain, or may present with a pseudoparalysis.

Treatment is by immobilisation of the arm by the side with the elbow held at 90°. These fractures usually heal very well over the following weeks.

Linear skull fractures, as in the right parietal skull fracture shown at the right, are most common in the parietal region. The exact incidence is difficult to determine although they are reportedly common. The pathogenesis is thought to be from direct compression.

There may be external signs of injury (i.e. haematoma), but significant intracranial complications are rare. Rarely, there is an associated dural tear which may subsequently develop a leptomeningeal cyst.

No specific therapy is indicated, although a follow-up radiograph at several months of age may be useful to show healing.

Depressed skull fractures are most commonly associated with the use of forceps, with the most common site being the parietal bone. They may occur after pressure on maternal pelvic structures. Although rarely associated with epidural or subdural haemorrhage and cerebral injury, a CT scan may nevertheless be indicated. Many depressed fractures are managed conservatively.

Poor mineralisation of bone is a relatively common finding in extremely preterm infants, with those under 1000g and less than 30 weeks gestation at most risk. Terminology in the literature can be somewhat confusing, and other terms such as metabolic bone disease and rickets of prematurity have been used interchangeably. 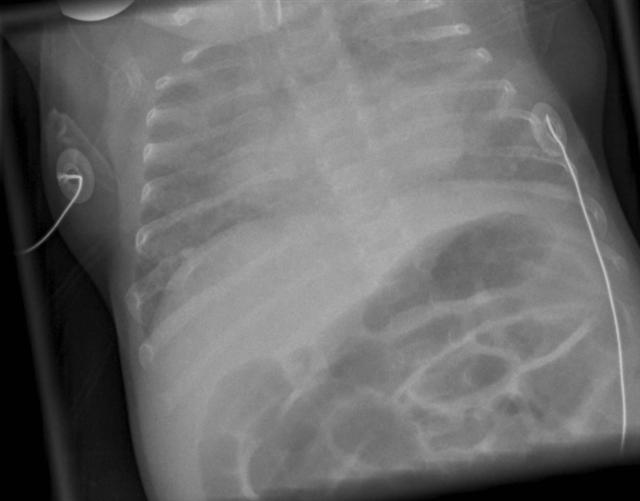 The aetiology is complex, and is relate to both nutritional factors (inadequate intake of minerals), hormones (vitamin D) and to mechanical factors (lack of mechanical stress applied to the bone). Infants most at risk are those who have been very systemically unwell (often with chronic lung disease and receiving diuretic therapy) and have been troubled with suboptimal nutritional intakes.

Severe osteopenia is rare, probably due to changes in nutritional and other neonatal practices. Some infants will require long-term nutritional supplementation, although there is some evidence that regardless of how osteopenic infants are, bone density improves with age and with adaptation to mechanical requirements of the body.

Osteomyelitis and septic arthritis may occur simultaneously in infants under 1 year of age, due to the unique nature of the vascular supply of the neonatal skeleton (perforating capillaries are present in the epiphyseal plate of long bones and provide a communication between the metaphysis and the joint space). The exact incidence of osteomyelitis and septic arthritis in neonates is not well defined. Common organisms include Staphylococcus aureus, Group B Streptococcus, and Gram-negative enteric organisms, but other organisms are also seen. The origin of osteomyelitis is thought to be haematogenous.

Symptoms are generally non-specific and are often overshadowed by the general condition of the septicaemic child. The baby may present with a pseudoparalysis with reduced movement of the affected limb. Swelling, erythema, and heat over the bone or joint may be present.

Early in the disease, radiographs may be normal. Subsequently, the normal fat markings of deep tissues may be obscured. Cortical destruction is unusual before the second week of the illness, so in the event of Staphylococcal septicaemia a complete skeletal survey should be taken 2 weeks into the treatment (or earlier if there are clinical signs suggesting osteomyelitis or septic arthritis). Clinical resolution precedes radiographic resolution, but some infants are left with significant joint or bone injury.

The images to the right show the serial radiographs of an extremely low birth weight infant with Staphylococcal septicaemia at 1 month of age. He had no clinical signs of osteomyelitis or septic arthritis.

The initial skeletal survey 2 weeks into treatment suggested some lucency in the left proximal humerus with some irregularity of the cortex suggestive of underlying osteomyelitis. A follow-up radiograph 2 weeks later showed clear difference between the right and left humerii. After completion of 6 weeks of intravenous flucloxacillin, there was resolution of the lytic changes in the bone, but some evidence of sclerosis and new bone formation around the proximal humerus.

Osteogenesis imperfecta (OI) is a generalised abnormality of bones due to problems with Type I collagen formation. There are at least 4 recognised types, although differentiation between types can be difficult in the newborn period.

Treatment is largely supportive, with referral to the Orthopaedic, Genetics, and Endocrine services. Medical treatment with bisphosphonates may be indicated.