With your support, we can help other children like Ethan.

Ethan was always a small baby and quite unwell a lot of the time.  His parents though it was just 'one of those things' until Ethan suddenly became very unwell.

Ethan's family is from a small town outside of Gore in the South Island.  In March Ethan had a very sudden seizure and was taken to the local hospital which transferred him to Invercargill Hospital straight away.

Ethan was conscious but very 'out of it'. Scans and tests showed that Ethan's kidneys were severely underdeveloped for his age and could no longer cope with his growing body so had shut down. He was in renal failure.

That first day felt like a week to us, there was so much to take in. I just held onto a hope that this wasn't really happening to my child and that Ethan was going to be the one in a gazillion that recovers.

Ethan was sedated and put on a ventilator to relieve the stress on his tiny body before being flown on the National Air Ambulance Service to Starship that evening. He spent six days in the Paediatric Intensive Care Unit (PICU) while doctors stabilised his kidneys and put him on regular dialysis.

He then spent a further four weeks on ward 26A where doctors determined the best course of action was a kidney transplant.  Ethan's dad Steven turned out to be a match and so gave his son the ultimate gift - a new kidney.

Ethan has been in and out of Starship since his transplant for various check ups and complications but was able to return home for good just before Christmas 2011. 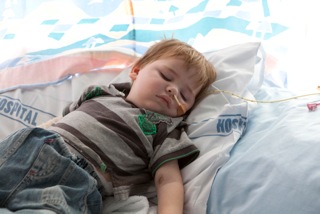